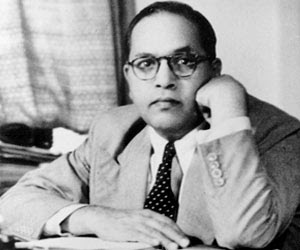 
Dr. B.R. Ambedkar was elected as the chairman of the drafting committee that was constituted by the Constituent Assembly to draft a constitution for the independent India; he was the first Law Minister of India; conferred Bharat Ratna in 1990.

Dr. B.R. Ambedkar is viewed as messiah of dalits and downtrodden in India. He was the chairman of the drafting committee that was constituted by the Constituent Assembly in 1947 to draft a constitution for the independent India. He played a seminal role in the framing of the constitution. Bhimrao Ambedkar was also the first Law Minister of India. For his yeoman service to the nation, B.R. Ambedkar was bestowed with Bharat Ratna in 1990.

Dr.Bhimrao Ambedkar was born on April 14, 1891 in Mhow (presently in Madhya Pradesh). He was the fourteenth child of Ramji and Bhimabai Sakpal Ambavedkar. B.R. Ambedkar belonged to the "untouchable" Mahar Caste. His father and grandfather served in the British Army. In those days, the government ensured that all the army personnel and their children were educated and ran special schools for this purpose. This ensured good education for Bhimrao Ambedkar, which would have otherwise been denied to him by the virtue of his caste.
Bhimrao Ambedkar experienced caste discrimination right from the childhood. After his retirement, Bhimrao's father settled in Satara Maharashtra. Bhimrao was enrolled in the local school. Here, he had to sit on the floor in one corner in the classroom and teachers would not touch his notebooks. In spite of these hardships, Bhimrao continued his studies and passed his Matriculation examination from Bombay University with flying colours in 1908. Bhim Rao Ambedkar joined the Elphinstone College for further education. In 1912, he graduated in Political Science and Economics from Bombay University and got a job in Baroda.

In 1913, Bhimrao Ambedkar lost his father. In the same year Maharaja of Baroda awarded scholarship to Bhim Rao Ambedkar and sent him to America for further studies. Bhimrao reached New York in July 1913. For the first time in his life, Bhim Rao was not demeaned for being a Mahar. He immersed himself in the studies and attained a degree in Master of Arts and a Doctorate in Philosophy from Columbia University in 1916 for his thesis "National Dividend for India: A Historical and Analytical Study." From America, Dr.Ambedkar proceeded to London to study economics and political science. But the Baroda government terminated his scholarship and recalled him back.

The Maharaja of Baroda appointed Dr. Ambedkar as his political secretary. But no one would take orders from him because he was a Mahar. Bhimrao Ambedkar returned to Bombay in November 1917. With the help of Shahu Maharaj of Kolhapur, a sympathizer of the cause for the upliftment of the depressed classes, he started a fortnightly newspaper, the "Mooknayak" (Dumb Hero) on January 31, 1920. The Maharaja also convened many meetings and conferences of the "untouchables" which Bhimrao addressed. In September 1920, after accumulating sufficient funds, Ambedkar went back to London to complete his studies. He became a barrister and got a Doctorate in science.

After completing his studies in London, Ambedkar returned to India. In July 1924, he founded the Bahishkrit Hitkaraini Sabha (Outcastes Welfare Association). The aim of the Sabha was to uplift the downtrodden socially and politically and bring them to the level of the others in the Indian society. In 1927, he led the Mahad March at the Chowdar Tank at Colaba, near Bombay, to give the untouchables the right to draw water from the public tank where he burnt copies of the 'Manusmriti' publicly.

In 1929, Ambedkar made the controversial decision to co-operate with the all-British Simon Commission which was to look into setting up a responsible Indian Government in India. The Congress decided to boycott the Commission and drafted its own version of a constitution for free India. The Congress version had no provisions for the depressed classes. Ambedkar became more skeptical of the Congress's commitment to safeguard the rights of the depressed classes.

When a separate electorate was announced for the depressed classes under Ramsay McDonald 'Communal Award', Gandhiji went on a fast unto death against this decision. Leaders rushed to Dr. Ambedkar to drop his demand. On September 24, 1932, Dr. Ambedkar and Gandhiji reached an understanding, which became the famous Poona Pact. According to the pact the separate electorate demand was replaced with special concessions like reserved seats in the regional legislative assemblies and Central Council of States.

Dr. Ambedkar attended all the three Round Table Conferences in London and forcefully argued for the welfare of the "untouchables". Meanwhile, British Government decided to hold provincial elections in 1937. Dr. B.R. Ambedkar set up the "Independent Labor Party" in August 1936 to contest the elections in the Bombay province. He and many candidates of his party were elected to the Bombay Legislative Assembly.
In 1937, Dr. Ambedkar introduced a Bill to abolish the "khoti" system of land tenure in the Konkan region, the serfdom of agricultural tenants and the Mahar "watan" system of working for the Government as slaves. A clause of an agrarian bill referred to the depressed classes as "Harijans," or people of God. Bhimrao was strongly opposed to this title for the untouchables. He argued that if the "untouchables" were people of God then all others would be people of monsters. He was against any such reference. But the Indian National Congress succeeded in introducing the term Harijan. Ambedkar felt bitter that they could not have any say in what they were called.

In 1947, when India became independent, the first Prime Minister Pt. Jawaharlal Nehru, invited Dr. Bhimrao Ambedkar, who had been elected as a Member of the Constituent Assembly from Bengal, to join his Cabinet as a Law Minister. The Constituent Assembly entrusted the job of drafting the Constitution to a committee and Dr. Ambedkar was elected as Chairman of this Drafting Committee. In February 1948, Dr. Ambedkar presented the Draft Constitution before the people of India; it was adopted on November 26, 1949.

In October 1948, Dr. Ambedkar submitted the Hindu Code Bill to the Constituent Assembly in an attempt to codify the Hindu law. The Bill caused great divisions even in the Congress party. Consideration for the bill was postponed to September 1951. When the Bill was taken up it was truncated. A dejected Ambedkar relinquished his position as Law Minister.

On May 24, 1956, on the occasion of Buddha Jayanti, he declared in Bombay, that he would adopt Buddhism in October. On 0ctober 14, 1956 he embraced Buddhism along with many of his followers. On December 6, 1956, Baba Saheb Dr. B.R. Ambedkar died peacefully in his sleep.
Email ThisBlogThis!Share to TwitterShare to FacebookShare to Pinterest
Posted by Sivaramakrishnan. Salem at 09:57